Apple Silicon is Set to Revolutionize VR and AR

At this point, it’s a pretty badly kept secret that Apple is working on some sort of headset or even multiple headsets. They’ve bought up companies with technologies that pertain to AR and VR in the past. We’ve also seen the early fruits of their labour as well.

All of these technologies that have made it into Apple consumer devices are most likely happy offshoots of R&D efforts towards a converged AR device.

There has been no official announcement of an Apple headset, and yet leaks, rumours and other credible sources have said that Apple was on the verge of releasing a headset in 2020, but then decided to delay it until the 2022-2023 window.

This is interesting to me because what we did get in 2020 was the bombshell launch of the Apple M1 chip, found in the latest MacBook Air and MacBook Pro notebooks.

While it might not seem to be immediately connected, if you think about it, Apple Silicon promises to elevate any headset they produce from a niche curiosity to a killer product with the potential to wipe VR giants such as Oculus from the map.

What is Apple Silicon? 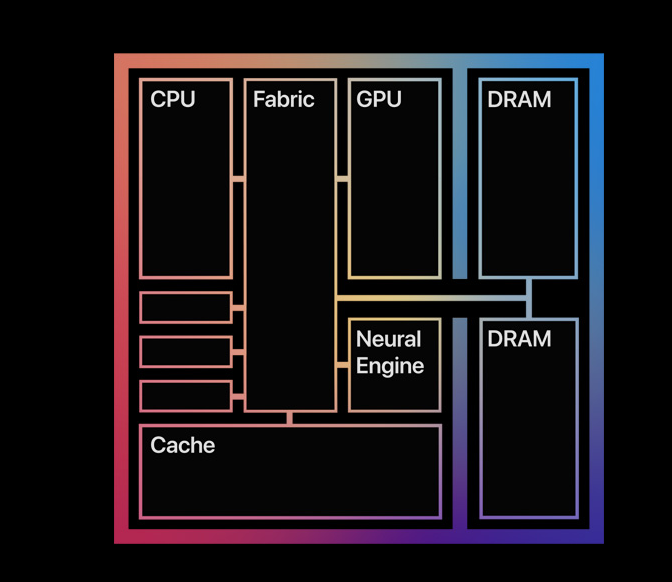 Just in case you haven’t been keeping track of what the folks in Cupertino have been up to, let’s talk about Apple Silicon itself before discussing what it could do for XR.

For years Apple has been producing their own custom system-on-a-chip packages for the iPhone, iPad and other iOS devices. These are based on the ARM architecture, which companies can licence to produce their own processors.

Fundamentally, it’s the same silicon architecture used by most mobile devices, but Apple has modified and beefed up the hardware to achieve performance levels that are pretty unbelievable.

Modern iPhones and iPads have enough grunt to stand toe-to-toe with typical mid-range laptops, and that’s in a device with a small battery and no active cooling.

Apple has been having trouble with Intel CPUs in its devices for years now. Intel has been falling behind with their processors when it comes to power consumption, performance and heat output, which is why Intel MacBooks in recent years have been hot and suffered from performance throttling.

With the release of the M1 chip, Apple has scaled up their own chips and given them room to breathe. In the case of the MacBook Pro 13, the M1 even has active cooling. Battery life has gone through the roof on these devices, with the MacBook Pro posting over 20 hours of continuous, full-performance use on a single charge.

The performance is also staggering; the M1 comes within spitting distance of the Core i9 implementation in the MacBook Pro 16. The GPU solution in the M1 reportedly exceeds that of the Geforce 1050 Ti.

I know that sounds modest, but this is a mobile chip, and from that perspective it’s nuts. So as you can imagine, if Apple’s headset contains some variant of the M1, or A12Z or some new custom chip in the family, it’s likely to seriously raise the bar.

What Could an Apple Silicon Headset Achieve?

Let’s pretend it’s the M1 as we know it stuffed in a VR headset. What sort of experience can we expect?

First of all, it would bring standalone VR much closer to the entry-level of tethered PC VR. Yes, the M1’s GPU cluster is still some way off from the PC minimum, but it’s also important not to forget that Apple has its own graphical API called Metal.

This has been used to great effect on iOS and macOS devices and could be a game-changer in mobile VR.

Battery life would be another big one. My first-generation Oculus Quest is lucky to get three hours of play before needing a recharge.

While it is true that most people don’t spend three hours in VR continuously, longer battery life isn’t just about the amount of time you can play in one go.

There’s nothing worse than picking up my Quest only to realize that it’s drained the battery overnight and needs to be charged first.

When we start thinking about a headset that’s meant to be worn over long periods of time and makes use of advanced AR, battery life becomes much more important. Now you want a headset or glasses that will last as long as a typical workday. Apple silicon has the potential to give us that sort of battery life.

Targeting What Oculus Quest Does Best

The other reason I think an Apple headset might spell trouble for the likes of Oculus is that Apple is already very good at the strongest feature on the Quest – it’s ecosystem.

Apple is the king of walled gardens, and if they decide to compete in the same space as Quest, it could definitely draw people in.

One of the things I love about Quest is their approach to quality assurance, with developers needing to commit to quality standards even before they start developing the game or app.

Apple also has this level of appeal and are actually much better at it overall, so any Apple VR headset is likely to match or exceed what Quest has.

Tethered VR is an Open Question

Of course, Quest wasn’t a mainstream recommendation until the release of Oculus Link. A feature that lets you connect the Quest to a PC as if it were a Rift. I honestly don’t know if Apple would want to compete in the tethered PC VR space, but in my opinion, it should be something they offer.

The big question is whether such a feature would be like Oculus Link, using USB or if Apple will implement the more traditional HDMI + USB solution. The headset would also have to be compatible with standards such as Steam VR or OpenVR.

I really do hope that Apple takes a more open approach to their headset working with other VR platforms, but this is one company where I don’t want to hazard a guess at how they’ll tackle the issue.

Given what we’ve seen of Apple silicon so far, I really believe that a standalone Apple headset could really leapfrog current technology. There is, of course, the question of price.

It’s doubtful that a standalone headset from Apple is going to sell for anywhere near the $299 price point that a Quest 2 goes for. That will certainly dampen things a bit for most people.

Then again, Apple just released $550 over-ear headphones in the form of the AirPods Max, and they can’t keep up with demand. So it might also be that Apple is the company who ends up making VR and AR truly mainstream.

All I know is that they now definitely have the hardware and software technology to create a very special product indeed.