Canon, the famed camera company, has just released a video showing off a headset named the MREAL S1. While the video and written details stop short of specifications, what we do know about this new headset is already pretty impressive.

With a release date set for February 2021, it won’t be long before all is revealed. For now, there’s still plenty to dig into before this ultra-expensive enterprise headset hits the market.

A History of Headsets

Like me, you might be surprised to hear that Canon is releasing a headset at all. Yet this isn’t their first or even their second commercial headset release. In 2016, they released the MD-10 headset and last year they showed off the MD-20.

The MD-10 had a ridiculous price tag of $82 300, which is insane even for enterprise-grade hardware. The MD-20 followed last year in 2020, although I couldn’t track down exactly what the price on the MD-20 is. It’s a case of if you have to ask then it’s probably too much. 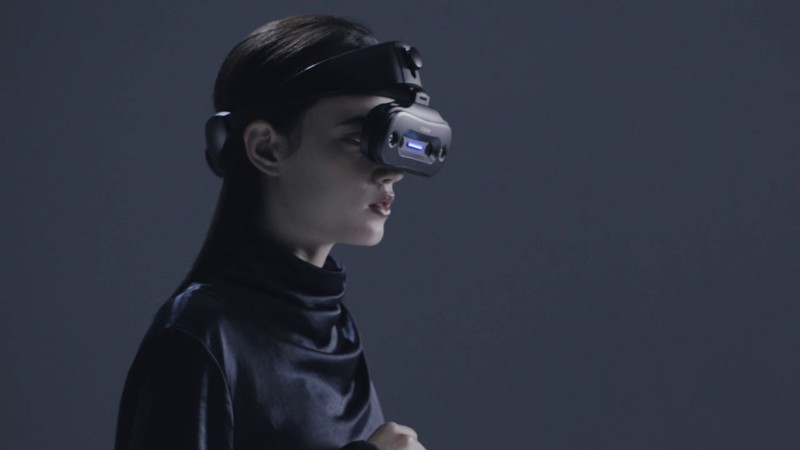 The most striking thing about this headset is how tiny it is. Look at the picture above. There isn’t even a shroud to block out light. So clearly this is mainly an augmented/mixed reality headset.

With its flip-up design, the Mreal S1 seems like exactly the sort of thing a working professional (such as an architect or engineer) could wear all day without much issue. You don’t have to wear it either.

As far as we can tell, the headset is also available in a handheld mode, just as the models that came before it. This is generally for situations where you want someone to simply pick up the headset quickly to view content.

If you want to interact with anything, then obviously the head-mounted version is the only practical solution.

The Mreal S1 is in direct competition with other enterprise-grade mixed reality headsets, such as the hololens. However, it’s small and doesn’t use the large waveguide visor approach. Instead, it uses a more traditional pass-through system.

That is, there are two cameras on the front of the headset that pass the view on to a display in front of each eye. That camera image is then blended with digital imagery calculated with positional data from the tracking system.

Speaking of which, it seems the Mreal uses an additional two cameras for inside-out tracking. Canon hasn’t given out any technical details at this point.

The software in the preview video is also mighty impressive. The user in the video reaches out with her bare hands and manipulates virtual objects, such as machine parts as if they were in the real world.

It’s not clear whether the S1 will have a shared mode where multiple users can see the same virtual objects, but it seems like a great solution for training and design iteration.

Despite the compact size, the Mreal isn’t a standalone unit. You still need to tether it to a powerful computer, which might limit the space you can move around in. The good news is that it seems the asking price for the Mreal actually includes a computer as well as all the software.

It Costs HOW MUCH?

We might not have any big-number specs to ogle, but Canon has given at least one mind-boggling numeric nibble – a $38 400 price tag!

Even if you take the cost of a fairly high-end workstation off the top, that’s still a staggering amount of money for an AR headset. Certainly, Canon has done an amazing job with the hardware, but I don’t think there’s anything fundamentally groundbreaking here.

There may be custom silicon, along the lines of the holographic processing unit of the Hololens. However, as a tethered headset, I suspect most of the heavy lifting is being done by the connected computer. So why is it so expensive?

Most of the cost, I suspect, comes from the research and development of the technology. The software, in particular, is likely the most expensive part of the whole product. That being said, the S1 represents a massive step up in miniaturization compared to the MD-10 and MD-20.

Consider also that the MD-10 cost a whopping $82 300! So the S1 is actually a bit of a bargain. Sort of makes you feel sorry for anyone who forked out for the first model four years ago.

Another part of the large cost is most likely the included support. With a small user base and very specific needs, you can bet that companies who need this technology probably have to work closely with Canon in order to get the most out of the hardware. So it isn’t actually fair to say that.

These sorts of high-end enterprise toys are a lot like Formula 1 cars. No mere mortal is ever going to take one home, but plenty of the cool technologies found in these high-end machines eventually trickle down to consumer devices.

I really like how compact and practical the headset is. This is what I imagine near-future display devices will be like. For example, if Apple ever comes through with their AR glasses. I’d expect it to be this small.

Of course, if you have to stick a whole computer into the headset, then it’s going to bulk up again, but there’s always the option of wireless tethering or a belt pack like the one the Magic Leap uses.

While the S1 is very much out of reach for almost everyone, don’t forget that the first HD TVs were also eye-watering when it came to price, now you can buy them in grocery stores.