While our blog is usually dedicated to the consumer-side of VR and all of the great VR content you can enjoy, it’s important not to forget that there’s an equally diverse and interesting content creation side to VR as well.

You might assume that only large teams of people with plenty of money can create great VR content. Maybe you think you need to have next-level software development skills to make something cool in VR.

However, almost anyone with a 360-degree camera and some creativity can make compelling stuff best seen through a VR headset.

As the name suggests, a 360-degree camera is one that can capture an image capturing a 360-degree field of view. Generally, this is accomplished by using multiple camera sensors and lenses.

These separate images are taken at the same time and then stitched together, forming a single seamless image.

Some older 360-degree cameras, such as the FreeFly 360, don’t cover the entire vertical field, but most modern cameras have the entire spherical field of view on offer.

Cameras can often take both photo and video content, but some cameras are strongly biased towards one or the other.

VR headsets offer a stereoscopic 3D image, but the vast majority of 360-degree cameras only capture a monoscopic image. So you still get an immersive 360-degree spherical image, but that image will be flat.

Stereoscopic 360-degree cameras do exist, but they are much more expensive and relatively rare. Why? Because you need multiple sensors for each angle.

Typically stereoscopic 360-degree cameras have eight camera sensors, arranged in four pairs. As you can imagine, this takes a lot more hardware horsepower to stitch and render than a monoscopic arrangement.

The cameras also tend to be bigger and bulkier, making them unsuitable for action-style recordings or situations where you want to walk around with the camera. Instead, they’re mostly used on a tripod to record static scenes.

A Note on the Stitch Line

I’ve mentioned “stitching” a few times above, and this important concept is worth exploring in more detail. Your typical 360-degree camera, with two 180-degree sensors, has a blind spot between the two camera sensors.

The thinner the camera is, the smaller this blindspot. That slice of blind area where the two images don’t overlap is the stitch line. If objects are too close to the base of the stitch line, they will appear misaligned or have a section cut out of them.

By carefully positioning the camera and arranging the scene, it’s possible to virtually eliminate the stitch line, especially when it comes to still images.

For video, this is harder to do, but newer cameras have less pronounced stitching. In some cases, stitching can be adjusted after the fact of recording.

What Types of Content Can You Make for VR?

Obviously, since you are recording the real world, it’s not possible to make interactive VR experiences using a 360-degree camera unless it’s a choose-your-own-adventure style experience with different branches of video.

Typically 360-degree cameras are used to relay an immersive record of a real event or a scripted and staged scene for the burgeoning new field of VR cinematography.

360-degree cameras are also finding extensive use in so-called virtual tours. These are mainly used in real estate and hospitality and are becoming big business.

If you’re looking for a business opportunity that involves VR, this is one of the easiest ways to get started. It doesn’t require a heck of a lot of money or training, although you do need a certain level of savvy.

Despite 360-degree photography and videography being relatively obscure at this point, there are actually quite a lot of cameras to choose from.

While I won’t go as far as saying that this is a buyer’s guide, these are some of the best choices. At least when it comes to the mainstream 360-camera makers.

Unless you have a virtually unlimited budget, these are some of the best options out there. 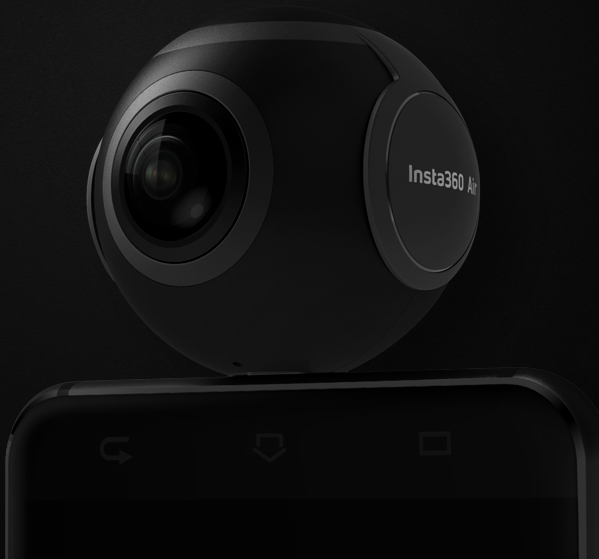 While you won’t see too many people raving about the Insta360, it’s actually an ingenious little device. This isn’t a full-on camera by itself. Instead, it slots into your phone’s charging port and piggybacks on its hardware to do the job.

While the quality is no good for professional work, you can certainly create some awesome 360-degree content for social media at a price that’s hard to argue with.

It’s also much easier to throw this little ball in your bag and always have it with you than lugging around a dedicated 360-degree camera all the time.

The quality is better than you might think at this price point, just make sure that you get the right version of the Air for the type of phone that you have.

Ricoh pioneered the consumer-grade 360-degree camera with their original Theta camera, and since then the range has expanded a lot. The SC2 sits on the line between a consumer-grade device and truly professional-grade products.

There are two versions of the SC2, with one sporting the “for business” title stuck to the end of its name.

There’s no hardware difference between the two, but the business model has a few software features that do make it easier for real estate agents to take great photos, which brings us to the main market for the SC2.

It’s popular among those who do entry-level virtual tours as well as those looking to show off properties for sale or rent.

The SC2 isn’t great for video, but you won’t find a better HDR photo solution at this price point if you just want to press a button and let the camera do its thing.

Apart from its mid-range resolution, the main limitation of the SC2 is its lack of support for RAW images.

You only get JPEG images, but that’s fine for most people taking snaps in a well-lit environment.

If you’re looking for a cheap way to get into the business of making virtual tours, the SC2 is a great choice, but it’s not a very good 360-degree video solution.

If the SC2 is Ricoh’s entry-level professional camera, then the Theta Z1 sits at the very top of the compact 360-degree camera space. It sports two one-inch sensors, which is an amazing feat considering how thin its body is.

The Z1 is the gold standard at the moment for 360-degree photography. It’s without a doubt the best camera of its type at the moment, but that comes with a much heftier price tag than the Theta SC2.

If you want to take professional 360-degree photos for the purposes of virtual tours or any other commercial purpose, this camera is an essential piece of equipment in your toolbox.

The Insta360 One R has a significantly different design to most other 360 cameras. In terms of overall shape and size, the One R is closer to a GoPro and other similar action cameras. It’s compatible with GoPro mount accessories and is weatherproof in its standard configuration.

Which brings us to the One R’s other major party trick – it’s modular! Yes, you can swap out the camera module to transform it from a 360-camera to a 4K action cam, a 5K camera with a one-inch sensor and even a drone-mounted 360-camera.

The standard Twin Edition comes with the 360 and 4K camera mods, so you’ll have to buy additional options separately.

While the One R doesn’t match up to the Z1 in terms of photographic abilities, it shines as a video camera and takes decent photos.

While you wouldn’t want to risk strapping a Z1 to your helmet while jumping out of a plane, that’s what the One R was made for.

The One X2 is sold alongside the One R and doesn’t replace it. However, it does replace the One X, which was a strong competitor to the Z1 for a long time.

The One X 2 has the familiar candy bar shape and thin body that cameras from Theta use, which helps minimize the stitch line.

The X2 isn’t quite up to the same action camera duties as the One R, but it does add waterproofing into the mix and lots of neat stabilization and editing features. I also like the circular touchscreen, which gives you a great preview of what the 360 view looks like.

The X2 has better specifications across the board compared to the One R, but it lacks the action camera mount compatibility, size and modularity. Either camera is a fantastic choice.

The real strength of the Insta360 cameras comes from the software, which lets you do most of the editing and make most choices after you’ve recorded everything.

These 360 cameras have advanced so quickly it can make your head spin. Early models, such as the Mi Sphere and the first Ricoh Theta had awful photo quality and horrible low frame rates for those models that dared to support video.

In just a few years resolutions have skyrocketed, image quality is catching up with regular action cameras, and the software workflow has taken a quantum leap.

It’s the perfect time to get in on this relatively new branch of content creation, and the cameras are finally moving into the sort of price range where you don’t need to be an eccentric millionaire to own one.