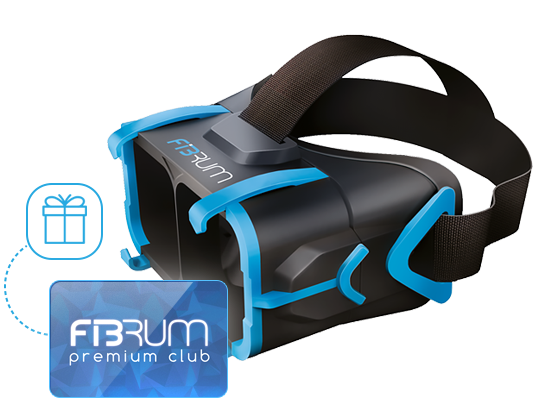 The Fibrum Pro doesn’t have many things that make it stand out from the crowd, although pairing it with its premium content library may be an interesting model going forward.

Fibrum has some of the cooler VR tech demos on the various mobile app stores, but these are only a way for the company to punt it’s big blue HMD solution.

In fact, if you buy one of their headsets, you get annual access to their complete app library.

The Fibrum Pro doesn’t have many things that make it stand out from the crowd, but one thing that’s immediately apparent is the lack of adjustability in the lenses. Fibrum say that they’ve figured out a way to make it so that the image is always sharp no matter what, although the lens position is fixed. It’s a clever trick, although it’s not clear how well it actually works.

The other neat thing that the Fibrum Pro does is make it easy to center the phone. Anyone who has ever used an HMD designed to be universal will tell you, is that it can take minutes of fiddling to get the darn thing properly centered. At which time you may not feel like trying VR anymore.

It achieves vertical centering by using a set of four springs. Horizontal centering is still up to you, but if you use a Fibrum app there’s a fast-centering frame that comes up when you run the app.

Fibrum also make a Bluetooth controller that can be bought with the Pro, but support is limited in Android and even more limited in iOS, since obviously it isn’t MFi compliant. You’d be better off getting an MFi gamepad if you’re  an iPhone user.

Bought this headset like a few months ago. First thing I want to mention is that these lenses actually work. I have a pretty bad sight and I see image very good. And annual access to apps is also really cool, I recommend to try Space Stalker since it's really big (more than 10 missions). And they don't have a gamepad anymore, so you will get only the headset and premium card with access to their apps.