JVC Shows Off XR Headset With Insane Field Of View 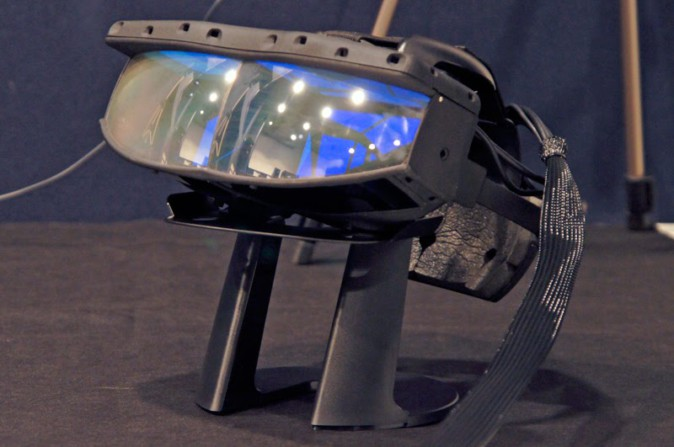 While the first Oculus Rift headsets, whether developer or retail, offered a properly immersive and present experience.

However, they still had some major areas where improvement was necessary.

Now we’re starting to see a new generation of high-end headset that seems to address what early modern VR has needed since day one.

JVC, yes the same JVC known for making VCRs and other home electronics, is stepping into this arena with a prototype headset aimed at the enterprise market.

VR has come a heck of a long way since 2016. Back then you’d have to fork out thousands of dollars for a computer and VR headset capable of producing premium VR.

Now, you can spend $300 on an Oculus Quest 2 and be set. The sort of computer you need to drive VR is both optional and affordable now. This all happened in only four years.

But the latest Oculus headset still shares the same basic limitations as the original.  First, although resolutions have improved, there’s an obvious level of pixelation.

Personally, it quickly becomes invisible to me, but there’s no denying that VR is still a little too fuzzy.

Secondly, the horizontal field of view has always been severely narrow. With early headsets offering around 90 degrees of horizontal view. Currently, the gold standard is about 110-degrees.

That’s a problem because most people have a horizontal field of view that exceeds 180-degrees. Which means wearing a VR headset can sometimes feel like having a pair of diving goggles on.

There’s no official name yet for this prototype headset, but the headline specification is a 120-degree field of view. Now, that’s not the widest FOV every.

So why is the JVC even newsworthy? First of all, even though this is aimed at the “enterprise”, JVC has the manufacturing capacity to actually make their headsets and have stock available. Headsets like the StarVR and Pimax are essentially small-run niche headsets.

The sort that will not be sold on the open market and will mostly be purchased by other companies. In my view, a prototype by a company such as JVC has a much larger chance of getting technology into consumer products.

The other major innovation here is that this is an extended reality headset that doesn’t use lenses and allows the user to see through the screens. It’s a product that offers a glimpse of a new approach to headset displays technology.

JVC says their prototype offers a wide eyebox, exhibits less color aberration and deals with the issue of the “chicken wire” effect that traditional VR headsets struggle with. The headset offers 2560×1440 pixels per eye. Matching the Pimax 5K for total resolution.

The project has been running since 2018, driven by JVC’s projector division. For a company that’s well known for making flat panel televisions, it might seem weird that their headset project is under the auspices of projector experts, but looking at the special mirror system it makes perfect sense.

The “half mirror” medium used to capture the displayed image is something special. It doesn’t seem to be the sort of waveguide that headsets such as the Hololens use, but something a little different.

It certainly overcomes the even greater FOV limitations of mixed reality headsets such as the Hololens.

While there has never really been official FOV numbers for the Hololens headsets, the Hololens 2 sits somewhere at 43-degrees for horizontal FOV.

That means that not only is the JVC unit quite a bit wider than most VR headsets, it basically triples the FOV of Microsoft’s best effort so far.

While the headset is officially aimed at the enterprise market, it does curiously make use of SteamVR tracking technology. So, in other words, exactly the same tracking system as the Vive and Index.

We don’t know if this is going to be true for a production version of this headset that may come out one day or if it’s just a stopgap during development. It would make sense for JVC not to reinvent the wheel where it doesn’t need to.

I’ll be very curious to see if SteamVR tracking is an interim solution, but the Valve Index is also sold in an enterprise form.

There is no telling if this prototype will ever lead to a product that consumers or even large businesses can buy. It’s clear that right now the company is investing a lot of money and time into developing this technology.

They must have a good use case for enterprise clients with customized needs. That’s feasible since with basic development kits enterprise customers can create bespoke solutions that work with JVC’s hardware.

To translate this into something for the consumer space, however, needs the development of a software ecosystem with third-party buy-in. That’s the strength of a device such as the Oculus Quest, not the hardware by itself.

JVC has invited companies to meet with them during December of 2020, so this news is probably part of the initial stages to gauge interest. It is the most exciting see-through mixed-reality display I have seen in recent memory.

It promises to be much more impressive from a visual perspective than the Hololens 2. Now it’s up to those enterprise partners to create use cases that will really blow our socks off.

What Is the Metaverse Standards Forum?

What Is Vergence-Accommodation Conflict and How Can Developers Tackle It?