Oculus Link and the USB 2.0 Update: Does It Work? 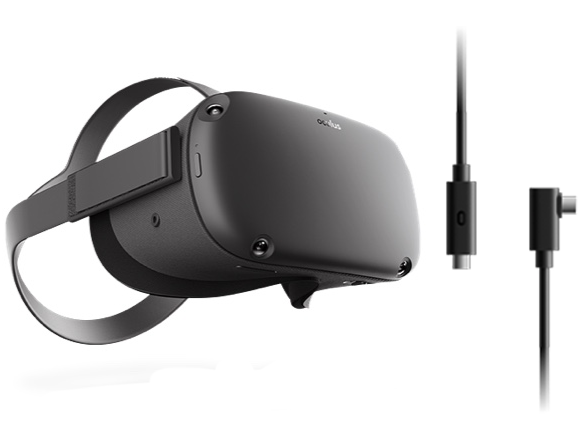 The Oculus Quest was undoubtedly the top-dog when it came to standalone VR headsets at launch, but since then Oculus have expanded its functionality in interesting ways. For example, the company recently implemented a beta feature that can track the user’s hands directly, using the onboard cameras. While no notable apps take advantage of this at the moment, it shows that Oculus are trying to get the most from the existing hardware by using clever software tricks.

Oculus Link is another, much more important example. While it’s still a beta feature, it allows you to connect the Quest to a computer using a USB C cable. The computer will see the Quest as an Oculus Rift. This means that every game and app that works with Rift will now also work with the Quest. The problem is that the cable itself needs to be the right type and quality. Sadly, at the feature’s time of launch, you could not use the long USB-C cable included in the box with your quest. Now, in a new update, Oculus allows the use of the USB 2.0 Type C cable that it comes with for Oculus Link, but how well does it work? We tossed aside our USB 3.0 cable and gave the included cable a shot. Here’s what we found.

Why Is This A Big Deal?

Before we talk about how well USB 2.0 worked for us in Oculus Link, it’s worth discussing why it even matters. Is it really such a big deal to just buy a USB 3.0 cable for use with Oculus Quest? The answer is actually pretty complicated. First of all, the minimum length Oculus recommends for the Link experience is 3 meters or about 9 feet. That’s the length of the included cable, but finding a USB cable at that length was pretty tough. We ended up combining an Anker cable with a USB-C extension cable. So getting to use the cable included in the box is a major convenience.

The second part of this puzzle has to do with USB 3.0 itself. It turns out that adherence to the USB 3.0 standard among USB 3 controllers isn’t always what it should be. The end result of this are reports of people who just can’t get Link to work, even though on paper their computer should do just fine. One option is to buy a known compatible USB 3 controller card, if your motherboard has an open slot for it, but for plenty of users that’s not an option.

USB 2.0, on the other hand, is widely compatible, stable and mature. The only problem is that Oculus didn’t believe that USB 2.0 bandwidth would be enough to carry the audio visual and other data needed for a smooth experience. With testing they seem to be happy with it, now we just need to see if we’re happy with it.

What You Need To Make It Work

In case you’re new to the idea of Oculus Link as a whole, here’s what you need to make it work. First, you need a Quest headset. Then you need a computer that’s VR-ready. In other words, it needs the same minimum specifications that you’d need to use an Oculus Rift.

Between these two divides, you need either a USB C to C cable or a C to A cable. We’re using a USB A to C adapter, so that our desktop machine can work with the included C-to-C cable. Bear in mind that, while USB 2.0 cables are now supported, Oculus still recommends that you use a USB 3.0 or 3.1 cable.

Apart from the hardware, you also need the Oculus application installed on your desktop computer. For Oculus Link to work, you also need to enable the Beta Channel to access beta features such as Link. Other than that, your Oculus app and graphics drivers need to be up to date. On the Quest side you also need to have the latest software updates. Then, when connecting the Quest to your computer, you’ll see a prompt in the headset to allow Oculus Link. Allow it and you should be in business.

The Oculus desktop application has a built in tester to see if a specific cable is fast and stable enough for use with Oculus Link. Using our janky extended USB 3.0 cable, the test passes with bandwidth of 1.5Gbps. Using the provided cable, we still got a passing grade. However the bandwidth goes down to 365Mbps!

As you can see, while we can use our Quest as a Rift, the application shows an amber warning, recommending USB 3.0 instead.

What really matters however, is whether the VR experience is affected in any way by using USB 2.0. Testing both cables back to back, the answer in our case was not at all! We tried heavy-hitters like Half-Life Alyx and more laid-back experiences such as Trover Saves the Universe. All the titles played in a way that was subjectively the same to us.

We couldn’t see any difference in resolution, smoothness or latency. Whether Oculus actually had to make compromises to work with USB 2.0 bandwidth, we don’t know. However, given how good the quality of the included cable (and that nice l-shaped plug on the headset end) it’s going to be our go-to Oculus Link cable.

The Age of “Retina” VR is Almost Here: What Does That Mean?

The 10 Games That Should Be On Every Oculus Quest