One of the best things about the Oculus Quest headsets is that Oculus keeps adding more and more features to the hardware.

Clever uses for the existing platform that the company hadn’t even thought of when they first released it. The most famous one now is probably Oculus Link, which lets you turn a Quest into a Rift by using a USB cable.

A feature that works so well it essentially killed off all Oculus headsets that don’t have “Quest” in the name.

However, for my money, the most impressive add-on is hand tracking. This is a feature that lets you ditch the Oculus Touch controllers and use nothing but your bare hands to interact with the virtual world.

After some refinement, this feature works pretty well. You can navigate the Oculus menus pretty easily and it’s handy to get your guardian set up for Oculus Link, without having to fish out a Touch Controller.

The problem is that games and apps that support hand tracking are still pretty rare. It’s really only a beta feature, so using it as a central feature of your product is a little risky.

Nonetheless, some developers are starting to add it as an option and a small handful of apps make central use of it. Which is where we come to The Line. An app I recently bought and tried mainly because it makes sole use of Oculus hand tracking. 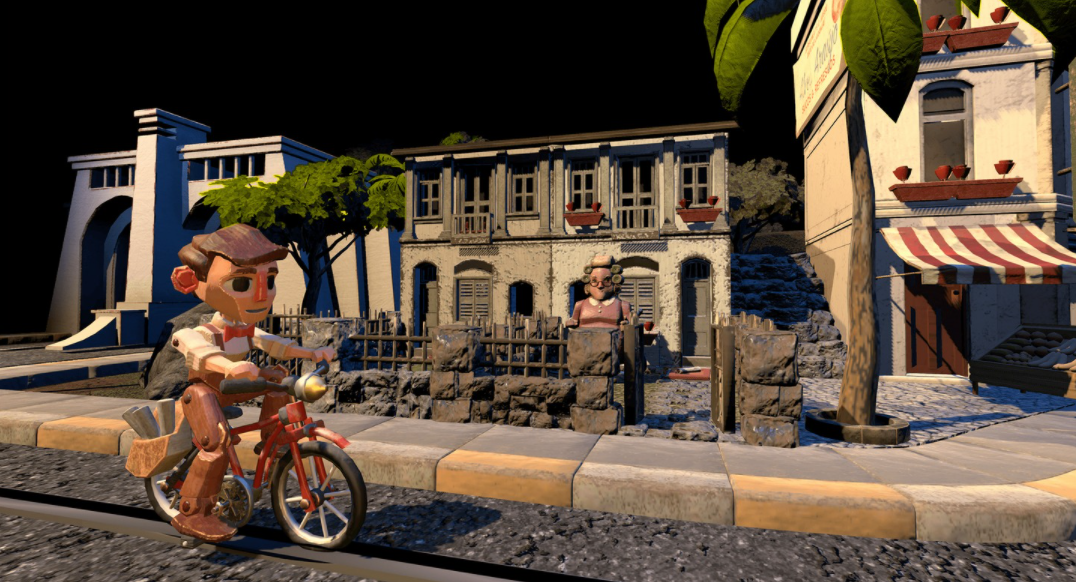 First, I have to explain what The Line is. It’s not a game, but a narrative VR experience. So in some ways it’s similar to something like Henry.

The award-winning Oculus short film. The thing about Henry is that there’s no interaction with the world at all. Sure, it feels like you’re there in the treehouse, but you don’t have any effect on anything.

The Line has a different premise. It’s a guided story, sure, but you need to do some busywork along the way.

The whole story is told in the form of a clockwork diorama. The various characters in the tale are mechanical puppets that go through each day on a predetermined track.

Your job is generally to turn knobs, push buttons and crank, er, cranks. This literally drives the story of unrequited love between two of these cute puppet people forward.

Thought as you probably expected, things literally go off the rails at a point in the story. 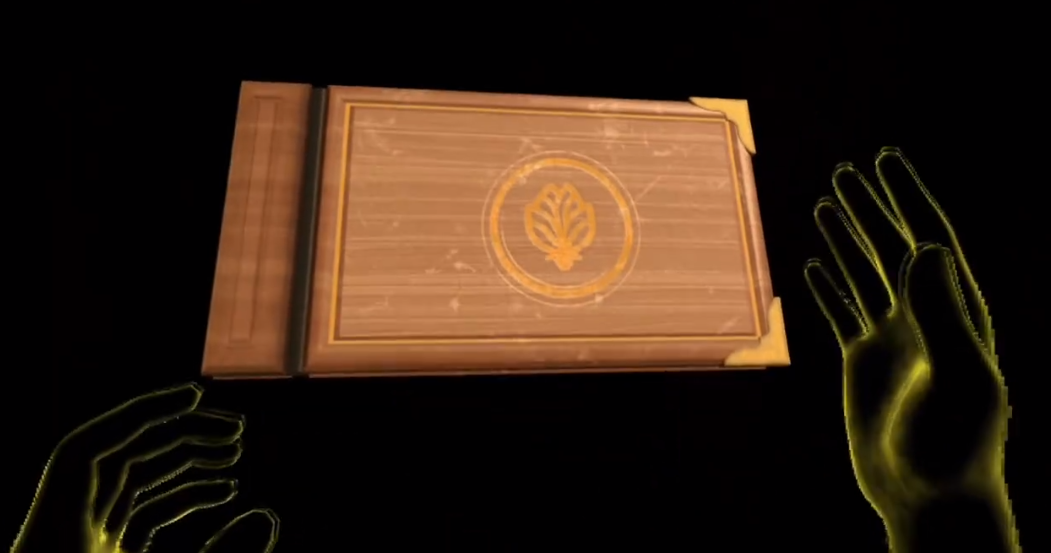 So yes, you only have limited interactivity with this VR puppet diorama world. You can choose to experience the story seated or at room-scale. Room-scale is the only way to experience it in my opinion.

You do need a fair amount of room to accommodate the whole experience, but it’s worth it to walk along the “line” of the complete diorama.

The most interesting thing about interacting with a VR world using only my bare hands instead of the controllers was the haptic feedback. “Hang on,” you say, “what haptic feedback?”.

Well, that’s exactly my point. Despite it being impossible to provide real feedback, my brain was pretty convinced that my hands were going to touch a solid surface.

So when reaching out to turn a handle, there’s a mild illusion of actually touching something. I’d half-expected to simply stick my hand through everything by accident. The truth is that everything else played along so that it feels pretty convincing.

I’m still impressed by how spot-on the individual finger tracking is. My virtual hand didn’t seem to lag and reflected my real hand position exactly. At least, as exactly as I could determine with the naked eye.

There were however plenty of small niggles. The biggest problem has to do with the level of light in your play area. I use my question in the living room space where you’d usually have a coffee table.

A nice square area with a decent amount of space for most VR experiences. I have never had any room tracking issues or controller tracking problems in this environment.

With hand tracking, however, I often encountered an issue where my hands would just disappear. The problem, it turns out, was that the lighting in the room is simply too dim. Turning on more lights did solve the issue.

I have no idea if the Quest 2 exhibits the same sensitivity to hand tracking in low light that I experienced. Presumably, since it was developed after the introduction of the feature, it’s cameras may do a better job. Nonetheless, you may need to play in a brighter area to get a more consistent experience. 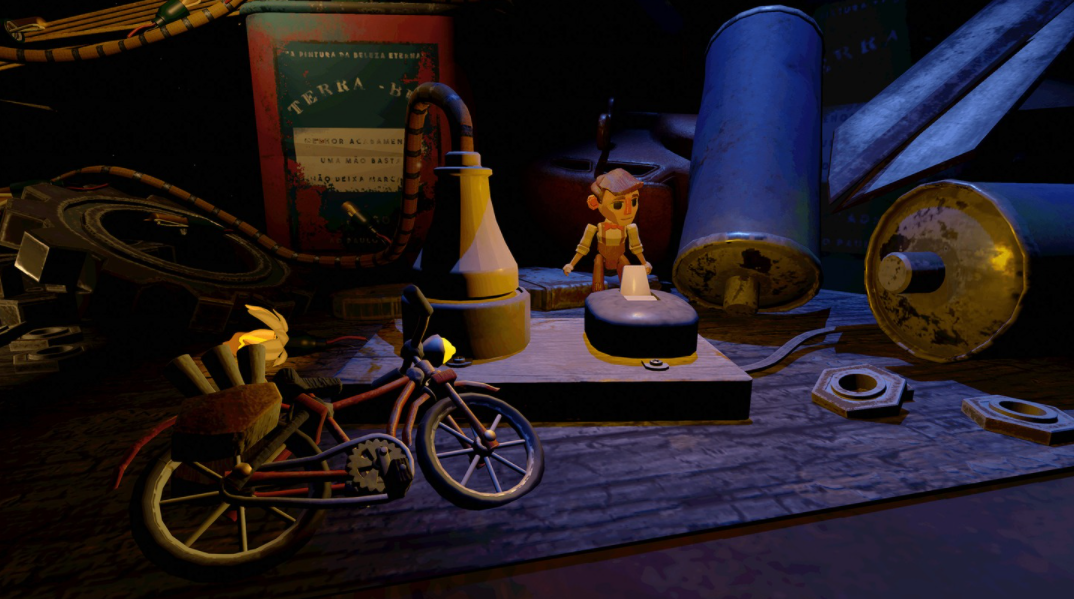 With the hand-tracking aspect of The Line out of the way, how’s the actual experience? It’s pretty charming, all things considered.

It’s almost Pixar-like in concept and execution. The visuals are a treat and I spent quite a bit of time simply admiring the diorama.

The story itself is rather predictable, at least on the surface. Although there’s more than a little subversive subtext to it all. It also has some genuinely creepy moments, but I don’t want to spoil it for anyone.

The narration also deserves some mention, the narrator does a fantastic job of bringing the world to life and the entire thing is rather slick.

It’s not a huge advancement in VR storytelling, but it does bring a new dimension to it. I really did feel more immersed by using my bare hands to touch and interact with this VR world.

It’s absolutely worth the very small price tag. Yes, The Line is a must-have title for your Oculus Quest or Quest 2.

Not only is a charming little story, it’s a great demo for hand tracking which is short enough to easily show off to your VR-sceptic friends.

You can buy The Line on the Oculus Quest store for only $4.99!