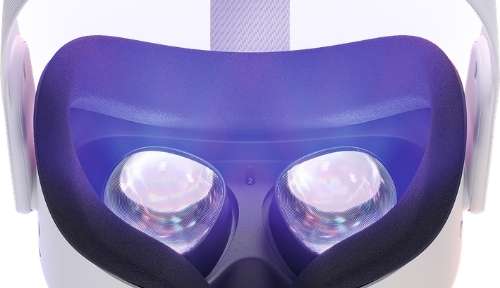 “Oculus Quest 2 is our most advanced all-in-one VR system yet. Explore an expansive library of awe-inspiring games and immersive experiences”

The Oculus Quest 2 is the successor to the incredibly popular Oculus Quest. It offers significantly improved onboard processing power, with an entirely new generation of CPU and GPU. The refresh rate of the screen has been improved. Comfort is better than the old model and the price has actually gone down.

The Quest 2 offers amazing room-scale inside-out tracking. It has a sophisticated guardian system that stops you from walking into walls and a large selection of amazing games and apps designed specifically for this hardware platform.

The Quest 2 is largely an upgrade on the Oculus Rift S as well. In fact, the Quest 2 is the reason that Oculus has discontinued all its other headsets. One of the reasons they can even contemplate doing this is because of a feature known as Oculus Link.

Using a USB C cable, you can connect your Quest 2 to a VR-ready computer and have it act exactly like a Rift. Which gives you full access to the entire PC VR catalogue on platforms like the Rift Store, Steam and Epic Games Store.

A link has left beta and is now a fully endorsed feature of the Quest. So it seems that the future of Oculus and perhaps of mainstream VR, in general, is Quest.