The 10 Games That Should Be On Every Oculus Quest

With the Oculus Quest 2 launching at a very palatable $299 this year, I expect a whole heap of people found one of these excellent VR headsets under the Christmas tree.

However, any hardware platform is only as good as the software. Oculus games, despite being cheaper than console games in general, still aren’t cheap.

When I first got my Quest 1, I spent just over $200 on my first smattering of games.

Every other VR publication is publishing their list of the best Oculus games of 2020 right now.

Instead of doing exactly the same thing I’ve decided to look beyond just 2020 and put together a list of 10 titles that I think would be welcome on just about any Quest device.

I haven’t played all of these titles personally and my own personal taste isn’t all that relevant. The idea is that if you gave someone a Quest with these 10 titles on it there would at least be two to three titles they’ll love.

Quite possibly one of the most famous VR games ever made and especially suited to the untethered Quest experience, Beat Saber will leave you breathless. Mainly because it can be a hell of a workout.

The idea of the game is both creative and simple in principle. In each hand you have a Star Wars style “lightsaber”, though for obvious reasons the game doesn’t call them this directly. You also won’t hear the classic “whum-whum” sound of a lightsaber either.

This is a rhythm game, where objects fly at you ready to be cut down by one of your sabers. You need to cut these flying objects using the correct saber while also dodging large VR walls that fly at you.

Beat Saber is great at making you feel like a badass early on and then will pretty quickly teach you the limits of your skill. I have spent more time than I’d like to admit playing this thumping game.

There’s also a constant stream of new music packs you can buy and devious game modes in case you’re starting to feel cocky.

I really love Vader Immortal myself, as you can read in my review of the game. Despite its flaws, it really is a special experience. Most especially if you’re a fan of Star Wars in general and Darth Vader in particular.

The game is broken up into three episodes, so if you don’t like the first one you can save some money and refrain from buying the rest of the series.

Vader Immortal is now also available on PC VR and on the PSVR, but I would not recommend playing the game there.

This is a title that absolutely needs a room-scale play space. I cleared out the entire room to play it and wouldn’t want to experience it another way if possible.

This is a self-contained adventure with a mix of different activities and environments. There’s puzzle solving, lightsaber fights and really cool force powers to play with.

It’s part game and part theme park ride, but also offers a genuinely interesting side story in the Vader mythos that any fan will appreciate.

Vader Immortal is fairly short, even adding up all the episodes and doesn’t have much in the way of replay value, but it certainly shows off what VR can do for immersive storytelling. 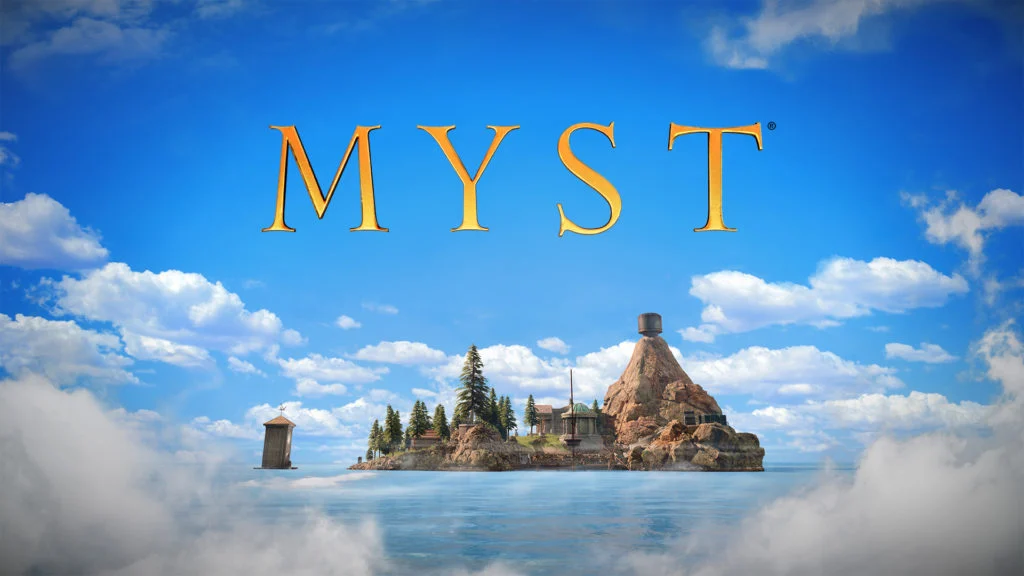 I still haven’t found the time to sink my teeth into this exciting release on Quest. It’s a ground-up remake of the classic Myst game from 1993 for VR. It will also be released on SteamVR, but for now it’s an Oculus exclusive.

The entire original Myst game is here, but all of the environments are lovingly recreated in Unreal Engine.

All of the switches, dials and other contraptions you pretended to flip with a mouse pointer in the original can now be operated with your real hands.

You can also wander around each location at room-scale, which is quite frankly a dream come true for those of us who marvelled over the mysterious world of Myst so many years ago.

All of the original puzzles are present and accounted for, preserving this challenging puzzler for a new generation of players. However, there is also a puzzle randomizer which you can use if you already know all the puzzle answers by heart.

The game is currently a little wonky and more patches are on the way, with the biggest addition to look forward to being a native note-taking solution. Right now players are relying on the Quest’s screenshot function as a solution.

Honestly, whether you’re a big puzzle fan or not, Myst should be on your Quest simply so you can stand and marvel at the eerie and beautiful world of the game. It really is like nothing else.

This is a port of a non-VR PC game that I played some time ago. To be honest, I found that game to be a little mediocre, but this is a case of a shift to VR being transformative to how a game plays and feels.

The original game really felt like it would have been better in VR, since it involves so much tactile interaction. The game now has full hand presence, so you actually pick up and manipulate objects.

Since you’re playing a police officer investigating mysterious happenings in the same woods of the original film, it’s an essential addition to the gameplay.

It also probably doesn’t need to be said that actually feeling present in those creepy woods is way scarier than looking at it from the safe window of a computer screen.

I am personally not a huge fan of jump-scare horror (or really any horror) in VR, but if you are the sort of person who lives for the genre then I think this is one of the most well-produced and meaty titles on the platform.

The Room VR: A Dark Matter

I absolutely adored playing the original Room series of puzzle games on iPad and when you think about it for a second the games premise and formula is absolutely perfect for virtual reality.

As with the original flat games, the idea is to solve a series of puzzles that stand in your way as you try to unravel some sort of mystery.

The atmosphere and theme are overtly Lovecraftian but don’t worry about getting a fright. Room games generally focus on a creepy and mysterious atmosphere, not getting your blood pressure to spike.

One of the best things about the original games is that they were built around the then novel multitouch screen.

The puzzles were absolutely tactile and showed off what playing a game on a touch device could really do. Exactly the same philosophy has been brought to this VR rendition of the concept.

The puzzles are made with the unique strengths of VR with room-scale space and motion controller tracking in mind.

I can’t say exactly how much time I’ve spent playing GunClub VR, but it’s a lot. This is one of the most cathartic VR games I have played and a great way to blow off steam after a long day of work.

This is a game all about guns and shooting things with them. Don’t worry, all of your targets are inanimate, but the various shooting ranges do offer things that aren’t possible in the real world.

For example, the cardboard Zombie targets that slowly wobble towards you can clamber over obstacles.

There are many different weapons and many different types of shooting events.You can also upgrade and customize your collection of guns with all manner of attachments.

Personally, I absolutely love shooting with a pistol in sideshow mode, but there really is something for everyone.

Whether you want to put in a quick target practice session or really spend hours blasting away at cardboard enemies in various locations, GunClub has you covered.

Having the Tetris Effect come to Oculus Quest was a pretty big deal. This creative masterpiece was originally a PSVR exclusive, but can now be found on PC and on Quest. The game can be played on a flat screen, but you really do lose what makes it all so special.

First of all, yes this is at its core just Tetris. However, imagine that you’re playing Tetris integrated with a professional laser and music show.

Each level of the Tetris effect takes you on an emotional audio-visual ride like no other, while you try to score well enough to move on to the next stage.

The music, the animation, the colors and the whole package is just so enthralling. Play this alone somewhere in a room where no one will bother you.

You can thank me later.

Table Tennis is a great fit for VR. A real table tennis setup is small enough to fit into a room-scale play volume.

Right now, despite feeling immersive and pretty realistic, most VR experiences aren’t really proper simulations of the real-world experience. Eleven Table Tennis might be the exception to that.

It simulates table tennis to an astonishing degree. Thanks to the precise tracking of the motion controllers in 3D space and accurate ball physics, you’ll really feel like you’re playing the game for real.

Even the light tap of the haptic actuator is enough to really feel like a ball. The absolute best feature might however well be the possibility of multiplayer with a friend.

If you have a severe fear of heights, you’ll want to avoid The Climb, but for me, it’s an amazing form of escapism doing something I would never be brave or fit enough to do in real life.

Part puzzle game and part adventure, in the climb you need to use your two hands and limited virtual stamina to find your way to the top of the route.

When you grip onto two handholds at the same time, your stamina is restored, but while you’re climbing hand-over-hand it drains. Let it drain too much and you’ll find it’s a long way down!

Your brain can be easily fooled into thinking you’re really high up as you climb, but that’s also a good thing for when you reach the top, the view is always worth the effort.

This title has one of the most notable updates for the Quest 2, although I don’t have one of the new headsets so I couldn’t attest to how much better it is.

It might now matter however because the original iteration of the game on the first Oculus headset already looked almost photorealistic.

This is an incredibly relaxing game and definitely one of the most realistic feeling fishing simulators I have ever played.

You can listen to your own music or watch YouTube videos while you chill at the waterside and catch fish.

The game has a fair amount of depth and progression, but honestly, even if you don’t take it too seriously it beats most of the pretentious meditation apps out there for pure relaxation.

Putting together a list of only ten games to recommend on Oculus is pretty hard! That’s a good thing since it attests to how much good content there is on their tightly-curated store.

There are so many other quality games that could have been included, but we’d be here all day. I also avoided including titles that are only good as multiplayer games.

There’s a wave of battle royale-style games on Oculus as well as tactical team-based shooters that are brilliant but can’t be enjoyed without other people being involved.

That being said, share your personal suggestion in the comments below and tell us why you love those particular titles so much.